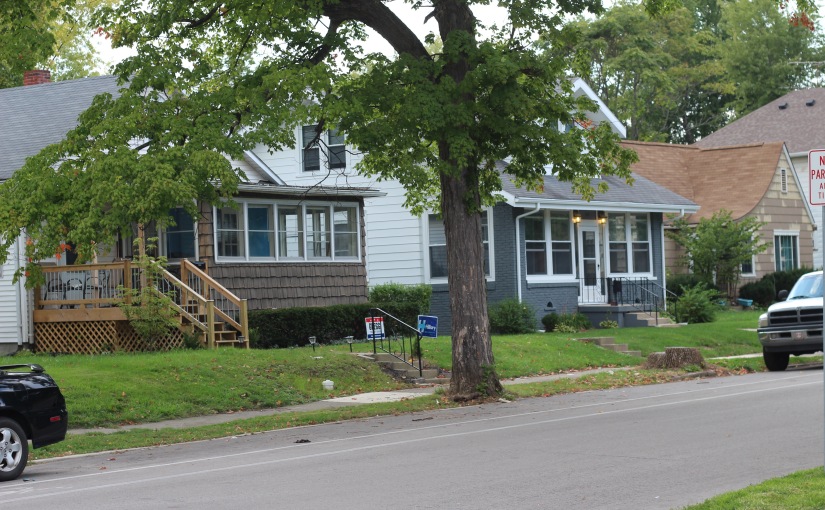 In over fifty interviews conducted with residents who currently live in the Riverside- Normal City neighborhood, or who had lived in the neighborhood at some time, a common thread recurred: a good majority of the interviewees stated that relationships among residents was a primary quality that made a neighborhood desirable to live in. From the interviews, it becomes clear that there is somewhat of a significant relationship between residents to the capacity that a majority of interviewees mentioned knowing at least one person in the neighborhood; almost always a neighbor in close proximity to their own home. These relationships looked very different depending on who was being interviewed and who that person’s neighbors were, but relationships among residents in the Riverside-Normal City were clearly emerging as a distinct theme.

“The house behind the corner [had] four boys living there a couple years ago. And they would put a sticky note on my door and it would say something to the effect of ‘Joey is turning 21 today, we are having some people over, please let us know if we get too loud’ and I would never hear a peep out of them, and they would do this several times throughout the school year. One time I got a sticky note ‘we are having a graduation party, let us know if we are getting too loud’ and I bumped into them outside. And I said ‘would you guys step up your game? You put these notes on our backdoor and I sit inside my house feeling sorry for you because you can’t throw a decent party.’ Mostly we have had really good kids living near us and stuff, but a lot times students are annoying to homeowners and it’s not like they are trying to be, but they don’t know any better” (4).

This interview furthers the belief that perhaps permanent residents feel acquainted with students enough to speak with them, and even joke with them, but may not have a relationship with them beyond this. Further, from this interview, and others like it, it became apparent that many permanent residents, like Bill Morgan, feel acquainted with students and enjoy living around them, but wish students were more involved in maintaining the neighborhood rather than disrupting it.

While the relationship between non-student residents and student residents is a popular subject in the Riverside-Normal City neighborhood, many permanent residents appear to be more concerned with non-transient neighbors in creating community in the neighborhood. Many permanent residents mentioned knowing their immediate neighbors and being able to rely on those neighbors in times of need. When asked about their relationship with their neighbors, Jeff and Andrea Eads said, “I do love the faculty and the older neighbors that live near us. I feel that they have been great, especially Tom and Bobbi. They have been to Dorothy’s (their youngest daughter) plays; we went snorkeling with them. We also live by two dance professors and we went to performances because we talked to them. Sheryl, who lives across the street from us, is a flight nurse in Indianapolis so that’s awesome” (5). Jeff and Andrea Eads have lived in the neighborhood for almost ten years, and Jeff currently serves as the President of the Neighborhood Association. Andrea’s answer demonstrates the ways in which permanent residents in the neighborhood interact to build relationships with one another, furthering the distinction between residential areas and neighborhoods, and solidifying Riverside-Normal City as a neighborhood.

Heather Williams is a permanent resident in the neighborhood. She has participated in developing neighborhood associations throughout Muncie and currently works as a liaison between Ball State University and the city of Muncie; attempting to build a stronger relationship between these two groups. In describing how RNC is different from other neighborhoods in Muncie, Heather said, “we are all across the map but I see us as very open and interested in learning from each other” (7). Her comment shows the ways residents view the neighborhood’s identity as being associated with people who live in the neighborhood and their relationships with one another. It also serves as a way of showing the ways people living in RNC are interested in developing those relationships further, again demonstrating the distinction of neighborhood from residential area. Many of the interviewees mentioned appreciating the diversity of the neighborhood in that there is nothing that really characterizes permanent residents. There is a belief among residents that diversity in the neighborhood includes different economic statuses, different backgrounds, and a wide variety of ages. Many of the residents who mentioned at least one of these segments of diversity said that the diversity added to the cohesion of the neighborhood by providing incentive for neighbors to learn from one another and to understand each other on a deeper level. Among the different age demographics, middle-aged families mentioned being aware of different families in the neighborhood for the sole purpose of having their children befriend one another. Scottie Limbird and Heather Williams are a great example of this. Having the diversity of older residents, younger graduate student residents, and middle-aged to young families added to the comfort of the neighborhood, but it also goes a step beyond comfort. The relationships, developed despite differences, show the ways that perhaps the RNC may be unique as compared to other neighborhoods. This distinction transcends the difference between neighborhood and residential area, and points to something probably far more valuable, which is the ability to have a relationship with someone–going to their dance recitals, having young children play together, attending neighborhood association meetings together, watching over a neighbor’s house while they’re away–knowing that there is no common denominator between the residents of RNC other than the space they share in Muncie, Indiana.